The solo emerged from a dialogue process between Mani Obeya and Willi Dorner.
The artistic process was accompanied by Esther Baio. 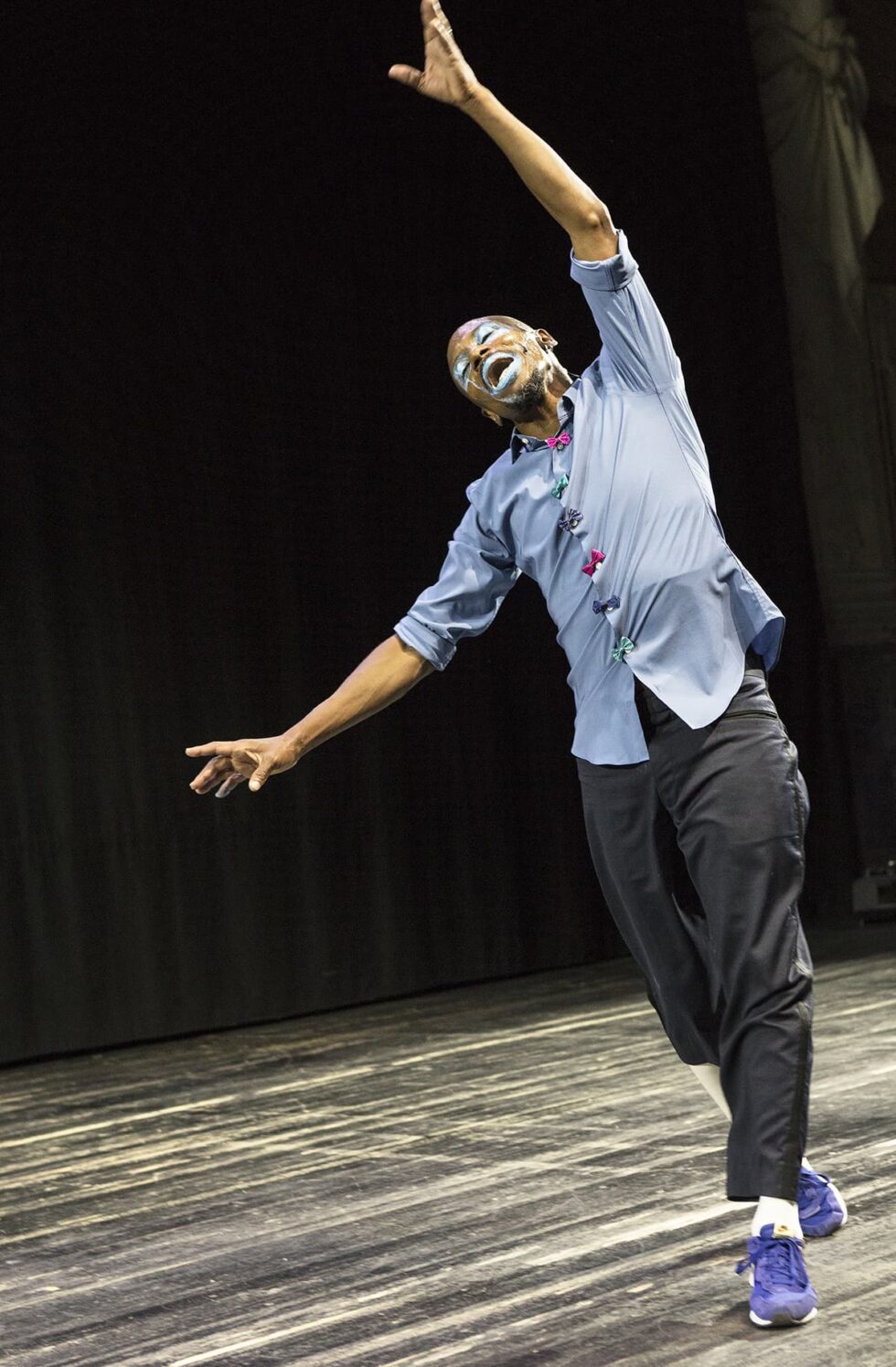 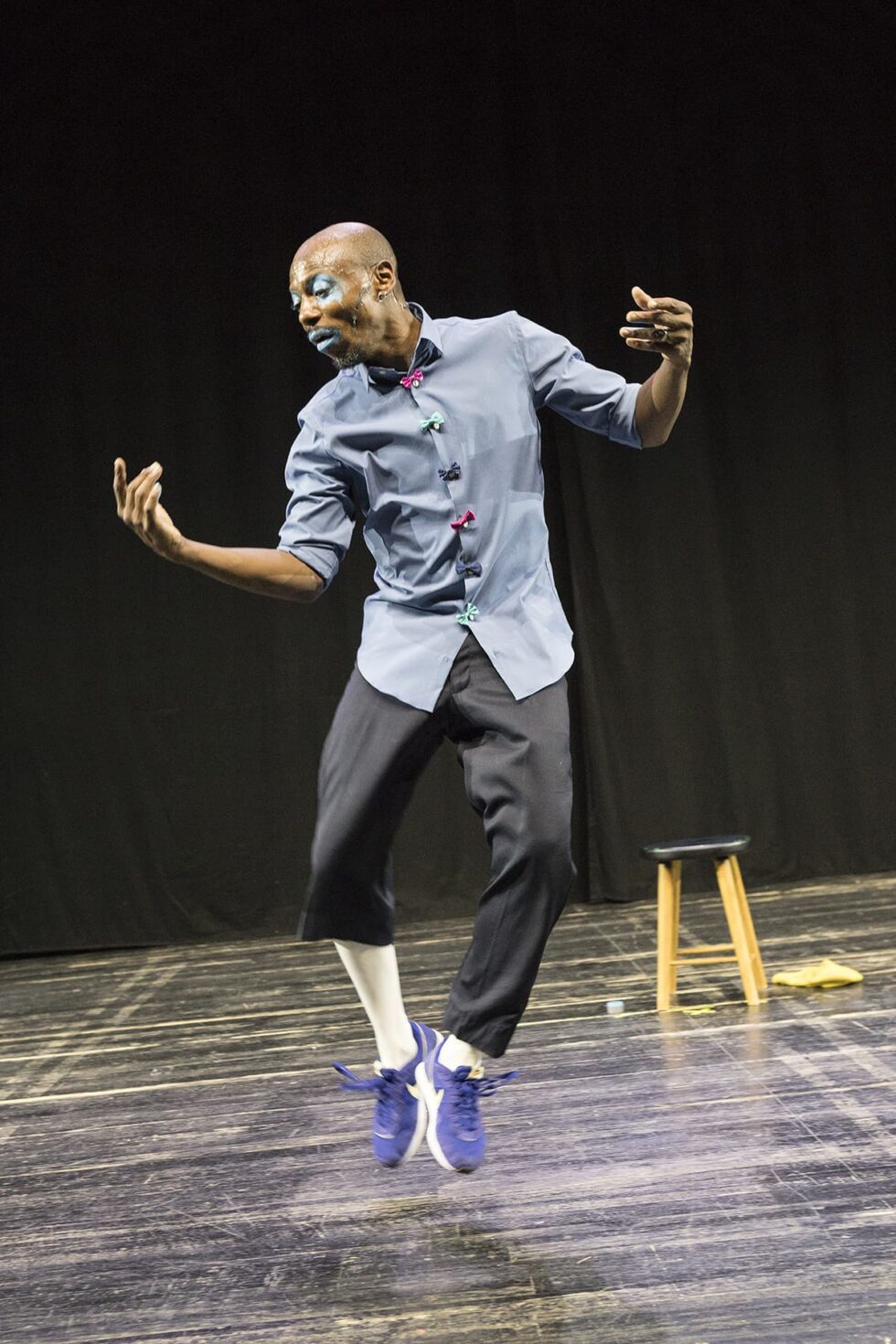 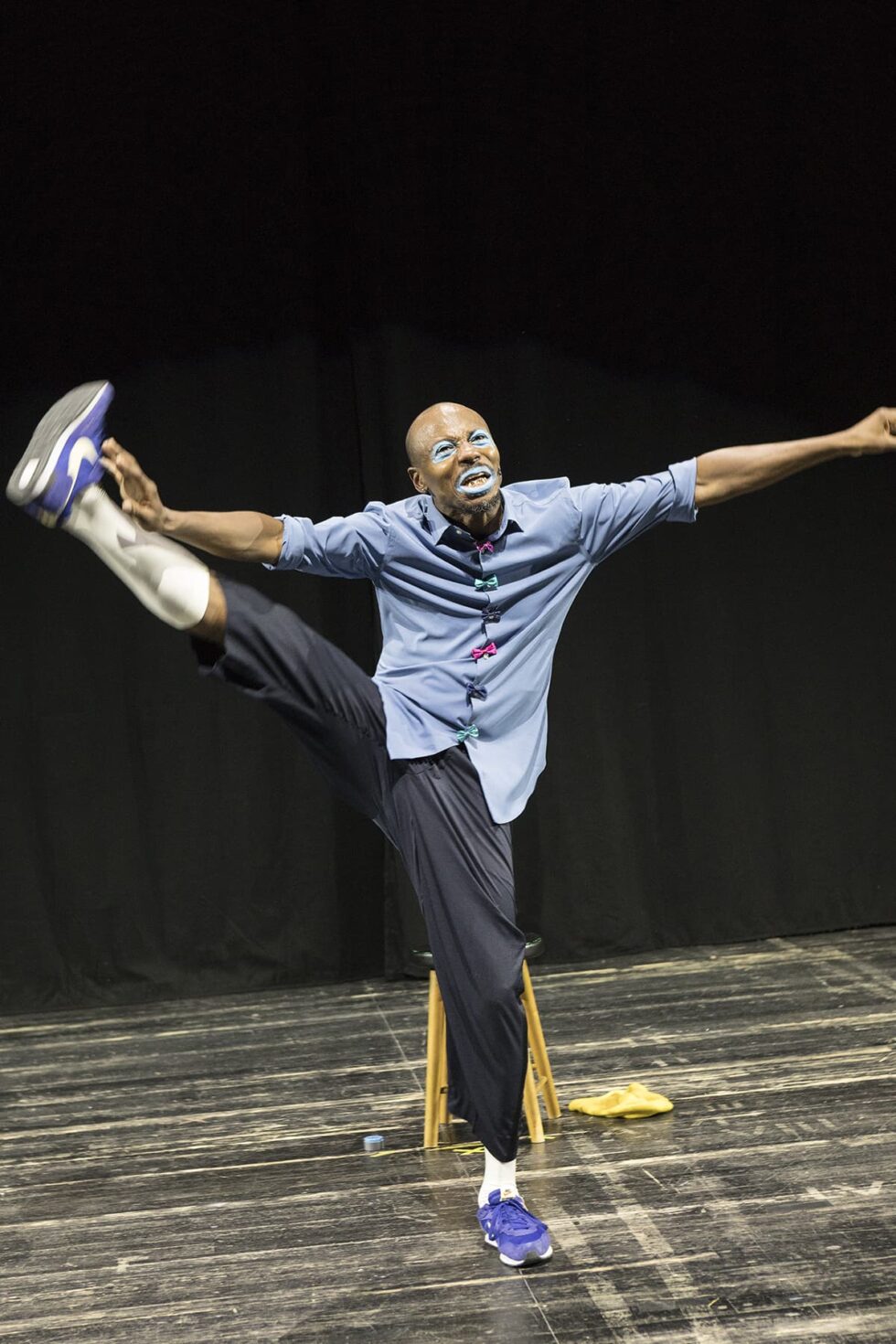 Pet names and caning
“What do you see,” dancer Mani Obeya asks his audience at the Kasino am Schwarzenbergplatz, “a dancer or a black dancer?” The answer is dutifully correct: “A dancer.” But Emmanuel Obeya, born in 1969 in Nigeria, is a black dancer, choreographer and singer. He tells us about this in “ME-NMU-AMI”, a solo he developed with choreographer Willi Dorner. The three syllables of the title all mean “I” in English and two Nigerian dialects.
Immediately after the warm-up, Obeya shocks the audience with a parody of the minstrel shows popular in the 19th century, in which men in black make-up presented a distorted image of slaves dancing happily. Until the 1970s, the stereotypes were shown in films or on the BBC Saturday night programme “The Black and White Minstrel Show”. Mani Obeya parodies the parody, showing without words the distorted image that has been burned into many minds. The theme of Obeya’s solo is given. The cheerful mien and the punchlines in words and movement almost make one forget that Obeya is not talking about his career and successes as a dancer. What he remembers and what moves him is serious and sad. Dance and song can soften the harshness of the facts.

All-round artist
Even though the all-round artist, who grew up in England, has successfully travelled all over Europe as a dancer and choreographer and singer, he is always reminded that his skin is not white. This was already the case at the Arts Educational School, London: “Chocolateface, Chocolateface” a girl apparently affectionately called him. In a squeaky voice, Obeya imitates the girlie; one senses how unpleasant this pet name was for him. Even with his real name, “Emmanuel Obeya”, the young man with a heartfelt desire to become a dancer has always been teased. Later, the shouts become less tenderly masked, “Shit Negro”, “Shit foreigner” Obeya has to hear again and again. These memories are not commented on, on the surface the dancer shows a happy face, but the negative experiences sit deep. Nevertheless, the young Emmanuel Obeya does not let himself be distracted from his goal of being a dancer even by cane blows on his backside.
Text passages mix with dance, Obeya does not spare himself, jumps and tap dances, shows grand jetés and arabesques, performs the Entrechat six while sitting down and then races through the memory palace again, panting. The moving solo is not only about Mani Obeya, it also tells of the world in which the artist lives and demands his own reflection on foreignness and racism.
Despite his success as a dancer, for example in Heidelberg or at the Vienna Volksoper, he confesses: “The ballet, that’s not me.” He looks for his yellow cap, which flew off his head when he jumped wildly, wipes the sweat from his forehead and waits for the Sofa Surfers – Wolfgang Frisch, Markus Kienzl and Michael Holzgruber. Obeya has been the frontman since 2004. He is also constantly on the move when he sings, but now he is completely himself, Mani Obeya is now me – mnu – ami – ich. The intimate, tragicomic dance narrative, more than a private collection of anecdotes, has earned the applause.

The solo ME – NMU – AMI, performed by Mani Obeya and created in collaboration with Austrian artist Willie Dorner, is like a reckoning with his own loaded history, before moving on to a new, happier identity. ‘Our bodies are political’ is the conclusion of the Nigerian-born, British-raised dancer, after telling us about his difficult start in the dance world for an hour, while presenting ballet and tap numbers with incredible lightness, precision and the manner of a born entertainer. These qualities didn’t protect him from the racism of the dance elite who told him things such as: black boys never get to dance princes. …………..Whatever the case, Obeya is clearly a very multitalented performer – and demonstrates yet another talent at the end of his solo when he brings on his band Sofa Surfers, leaving no question that he’s a true rock star too.